Iterative algorithms occur in many domains of data analysis, such as machine learning or graph analysis. Such algorithms are crucial in order to realize the promise of Big Data to extract meaningful information out of your data. With increasing interest to run these kinds of algorithms on very large data sets, there is a need to execute iterations in a massively parallel fashion.

Flink programs implement iterative algorithms by defining a step function and embedding it into a special iteration operator. There are two variants of this operator: Iterate and Delta Iterate. Both operators repeatedly invoke the step function on the current iteration state until a certain termination condition is reached.

Here, we provide background on both operator variants and outline their usage. The programming guide explains how to implement the operators in both Scala and Java. We also support both vertex-centric and gather-sum-apply iterations through Flink’s graph processing API, Gelly.

The following table provides an overview of both operators:

The iterate operator covers the simple form of iterations: in each iteration, the step function consumes the entire input (the result of the previous iteration, or the initial data set), and computes the next version of the partial solution (e.g. map, reduce, join, etc.).

There are multiple options to specify termination conditions for an iteration:

You can also think about the iterate operator in pseudo-code:

See the Programming Guide for details and code examples.

In the following example, we iteratively incremenet a set numbers:

Where applicable, this leads to more efficient algorithms, because not every element in the solution set changes in each iteration. This allows to focus on the hot parts of the solution and leave the cold parts untouched. Frequently, the majority of the solution cools down comparatively fast and the later iterations operate only on a small subset of the data.

You can also think about the iterate operator in pseudo-code:

See the programming guide for details and code examples.

In the following example, every vertex has an ID and a coloring. Each vertex will propagate its vertex ID to neighboring vertices. The goal is to assign the minimum ID to every vertex in a subgraph. If a received ID is smaller then the current one, it changes to the color of the vertex with the received ID. One application of this can be found in community analysis or connected components computation. 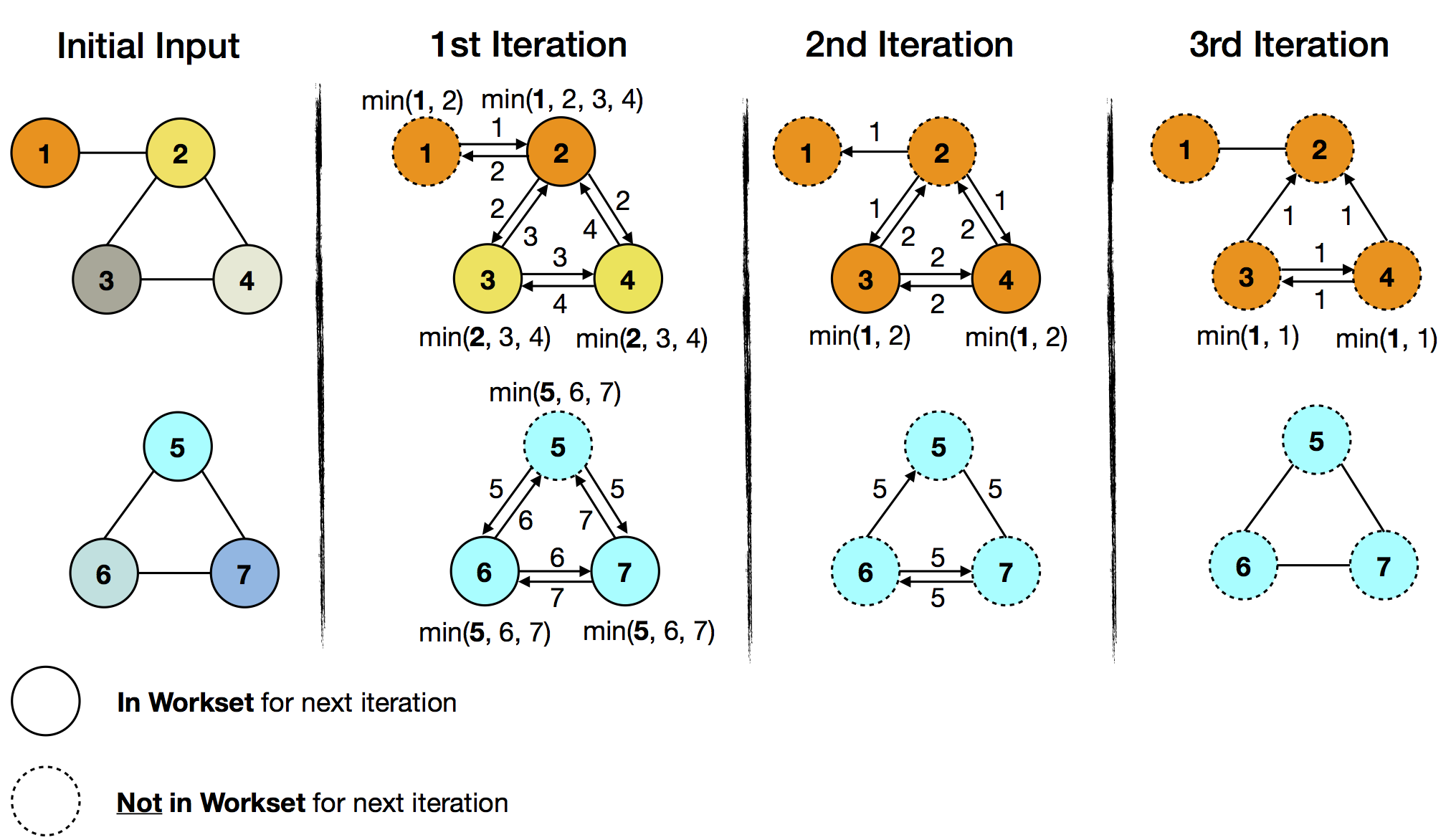 The initial input is set as both workset and solution set. In the above figure, the colors visualize the evolution of the solution set. With each iteration, the color of the minimum ID is spreading in the respective subgraph. At the same time, the amount of work (exchanged and compared vertex IDs) decreases with each iteration. This corresponds to the decreasing size of the workset, which goes from all seven vertices to zero after three iterations, at which time the iteration terminates. The important observation is that the lower subgraph converges before the upper half does and the delta iteration is able to capture this with the workset abstraction.

In the upper subgraph ID 1 (orange) is the minimum ID. In the first iteration, it will get propagated to vertex 2, which will subsequently change its color to orange. Vertices 3 and 4 will receive ID 2 (in yellow) as their current minimum ID and change to yellow. Because the color of vertex 1 didn’t change in the first iteration, it can be skipped it in the next workset.

The iteration terminates, when the workset is empty after the 3rd iteration.